With her deep rooted history, Konya has been a cradle to many cultures and civilisations throughout history. Hosting some of the oldest Christian settlements and shrines, Konya also has a strong place in cultural tourism attractions. In this context Konya, is one of the centres of cultural tourism as well as belief tourism.

Konya bears the traces of a history spanning back to 7.000 BC. The province has a rich history with her archaeological sites, natural and historical protected areas, caves and civil architecture.

The capital of the Sultanate of Rum, Konya has a huge potential in tourism with world renowned figures such as Rumi and Nasreddin Hodja.

There 135 hotels in Konya 7 of which have 5 stars. There are bedding capacity more than 14.000. Besides, Konya hosts more than 150 travel agencies with Operation Liciences.

There is one UNESCO World Heritage Site in Konya (Çatalhöyük). Eşrefoğlu Mosque, Konya-A Capital of Seljuk civilisation, Anatolian Seljuk Madrasahs and Eflatunpınar Hitite Spring Sanctuary are in the tentative list.

Beyşehir Lake, which is the largest freshwater lake in Türkiye, is one of the leading places in nature and hunting tourism. With new investments and efficient promotion, the lake and its surroundings will become one of the leading attractions in the province in the coming years.

The districts of konya that are situated over the Taurus Mountains, are very suitable for trekking and mountain sports. Also there is potential for hunting tourism in mountainous and woodland areas.

There are also prominent areas suitable for birdwatching. The areas of the Salt Lake within the region are home to the largest colonies of flamingos in the world. Regarding other fauna, there are wild sheep in Bozdağ and jade horses in Karaman’s Karadağ area.

Türkiye is one of the top seven countries in the world regarding geothermal springs. There are over 1.000 springs with temperatures between 20-100oC. There are more than 200 touristic establishments in the country on these springs and one of these is in Konya

Traditional handicrafts and folkloric values are parts of cultural tourism. Konya being one of the richer provinces in this regard, is promoting her carpet making, spoon making, rifle making, pottery, calligraphy and handmade tools craftsmanship traditions. Semah ceremony, folklore, folk dancing, sufi music and prominent figures such as Rumi, Yunus Emre, and Nasreddin Hodja constitute some of the local values of the region.

In Konya national and international cultural and touristic activities are organised annually. Some of them are: 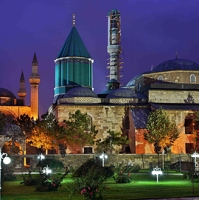